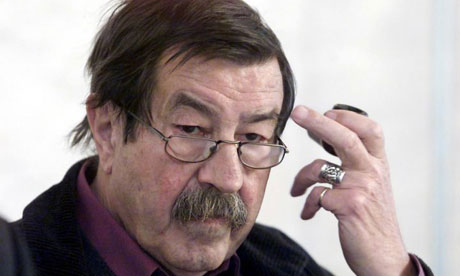 Günter Wilhelm Grass (born 16 October 1927) is a German novelist, poet, playwright, illustrator, graphic artist, sculptor and recipient of the 1999 Nobel Prize in Literature. He is widely regarded to be Germany’s most famous living writer.

Grass was born in the Free City of Danzig (now Gdańsk, Poland). In 1945, he came to West Germany as a refugee, though in his fiction he frequently returns to the Danzig of his childhood.

Grass is best known for his first novel, The Tin Drum (1959), a key text in European magic realism, and the first part of his Danzig Trilogy, which is also comprised of Cat and Mouse and Dog Years.

His works are frequently considered to have a left-wing political dimension and Grass has been an active supporter of the Social Democratic Party of Germany (SPD). The Tin Drum was adapted into a film, which won both the 1979 Palme d’Or and the Academy Award for Best Foreign Language Film. The Swedish Academy, upon awarding him the Nobel Prize in Literature, noted him as a writer “whose frolicsome black fables portray the forgotten face of history”.

In his Israel poem, Gunter Grass chose the wrong side – again

Gunter Grass, the Nobel-prize winning author who recently published a “poem” warning against Israel’s alleged nuclear capability, seems to have expected the ensuing criticism. In its lines he even anticipated the calls of “anti-Semitism” that would be his “punishment.”

The Israel of his verses is threatening to “annihilate the Iranian people” – an inaccurate accusation, since the threat of attack is and has been solely directed at Iran’s nuclear facilities, and since actually it is the Iranian “loud-mouth,” as Grass calls him, who has threatened to annihilate the Jewish state. But Grass doesn’t stop there: He goes so far as to condemn Israel as the “perpetrator.”