The Release of Gilad Shalit in Bible Codes - Part 1

The Release of Gilad Shalit in Bible Codes - Part 2 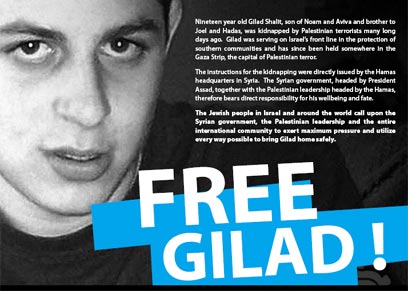 Gilad Shalit (גלעד שליט), born 28 August 1986, is an Israeli – French citizen and Israel Defense Forces (IDF) soldier. On 25 June 2006, he was captured inside Israel by Hamas militants in a cross-border raid via underground tunnels near the border with Gaza. The Hamas militants held him for over five years, until he was released on 18 October 2011.

Shalit was abducted near the Kerem Shalom crossing in Israel, and was held by Hamas as a hostage at an unknown location in the Gaza Strip. On 18 October 2011, he was released in a deal that secured his freedom after more than five years in isolation and
captivity, in exchange for 1,027 Palestinian convicted prisoners, including some convicted of multiple murders and carrying out terror attacks against Israeli civilians.

Hamas leader Ahmed Jabari was quoted in an Army Radio October 2011 broadcast confirming that the prisoners released as part of the deal were collectively responsible for 569 deaths of Israeli civilians.

During his captivity, Hamas turned down requests from the International Committee of the Red Cross (ICRC) to be allowed to visit Shalit, citing the excuse was that any such Red Cross humanitarian and medical visit could betray the location where Hamas was
holding Shalit hostage. Red Cross Director-General Yves Daccord insisted, “The Shalit family have the right under international humanitarian law to be in contact with their son”.

Multiple human rights organizations stated that the terms and conditions of Shalit’s confinement were contrary to international humanitarian law. The United Nations Fact Finding Mission on the Gaza Conflict, which released a report in September 2009, also called for Shalit’s release.

In its 27 May 2011 Deauville Declaration, the G8 demanded the release of Gilad Shalit.

Many of his sympathizers deemed Shalit’s capture a kidnapping because he was not granted any of the human rights due to a captured soldier under the Geneva Conventions, which entitles them to receive visits from the Red Cross and to communicate with family members, and because a ransom, even if not of a monetary nature, was demanded for his return.

Shalit was the first Israeli soldier captured by Palestinian militants since Nachshon Wachsman in 1994.[12] Shalit, holding a rank of corporal in the IDF’s Armor Corps at the time of his abduction, was promoted to Staff Sergeant, Sergeant First Class and then
Sergeant Major on the eve of his release.

The only contact between Shalit and the outside world after his capture and before his release were three letters, an audio tape, and a DVD that Israel received in return for releasing 20 female Palestinian prisoners.