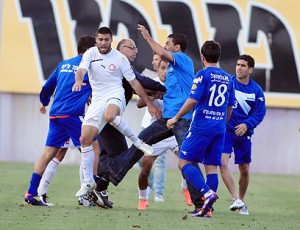 JERUSALEM (AP) -The head of Israel’s football association called off matches in the top two divisions at the weekend following another episode on Friday of mounting on-field violence.

“I don’t want someone getting killed on the football field, heaven forbid,” he said. “With all due respect to football, I don’t want football played tomorrow after today’s events.”

Luzon told Channel 2 TV that association officials would meet next week to decide what steps to take to quell the violence. He said he decided to call off the matches after consulting with Sports Minister Limor Livnat among others.

Livnat had demanded earlier Friday that all matches, including youth league games, be called off so football clubs could take stock.

“Football fields have become battlefields and are a meance to the public welfare,” she said.

Luzon has been criticized for failing to rein in the increasing number of violent acts at football games this year. But he told Channel 2 TV that he won’t resign, saying “it’s not my fault.”

Friday’s brawl came just three weeks after a similar melee broke out at the end of a Premier League game between Maccabi Petah Tikva and Hapoel Haifa.

The Israel Football Association docked Petah Tikva three league points but deferred the punishment to next season following an appeal by the club, which is chaired by Luzon’s brother Amos Luzon.

The deferral prompted allegations of favoritism.