Discoverers of Higgs boson, a.k.a. “the God particle,” awarded Nobel Prize in physics 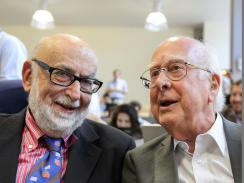 Francois Englert of Belgium and Peter Higgs of Britain won the 2013 Nobel Prize in physics on Tuesday for their theory on how the most basic building blocks of the universe acquire mass, eventually forming the world we know today.

Their concept was confirmed last year by the discovery of the so-called Higgs particle, also known as the Higgs boson, at CERN, the European Organization for Nuclear Research in Geneva, the Royal Swedish Academy of Sciences said.

“I am overwhelmed to receive this award and thank the Royal Swedish Academy,” the 84-year-old Higgs said in a statement released by the University of Edinburgh, where he is a professor emeritus. “I hope this recognition of fundamental science will help raise awareness of the value of blue-sky research.”