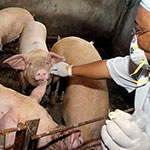 The 2009 flu pandemic or swine flu was an influenza pandemic. First described in April 2009, the virus appeared to be a new strain of H1N1 which resulted when a previous triple reassortment of bird, swine and human flu viruses further combined with a Eurasian pig flu virus, leading to the term “swine flu” to be used for this pandemic.

The pandemic began to taper off in November 2009, and by May 2010, the number of cases was in steep decline. On 10 August 2010, the Director-General of the World Health Organization, Margaret Chan, announced the end of the H1N1 pandemic, and announced that the H1N1 influenza event has moved into the post-pandemic period.

According to the latest WHO statistics (July 2010), the virus has killed more than 18,000 people since it appeared in April 2009, however they state that the total mortality (including deaths unconfirmed or unreported) from the H1N1 strain is “unquestionably higher”.

One Response to Swine Flu