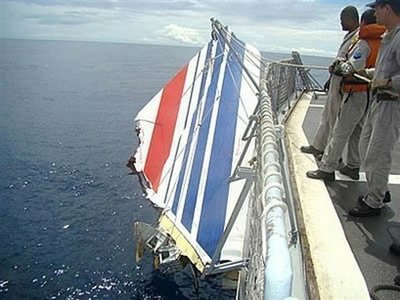 Vertical Stablizer of the crashed Air France flight 447 Aircraft found in the ocean.

Air France flight 447, an airbus 300-200, took off from Rio de Janeiro, Brazil, on May 31, 2009 at 7:03PM with 228 people on board. Somewhere around four hours into the flight something went wrong. Automatic Aircraft Communications Addressing and Reporting System radio messages were received from the aircraft indicating numerous air data faults and warnings.

One of the 24 automatic messages sent from the plane minutes before it disappeared points to a problem in the rudder limiter, a mechanism that limits how far the plane’s rudder can move. If the rudder mechanism is not working and the rudder is in an extreme position with the aircraft airspeed too high for the extreme position, then the forces generated on the vertical stabilizer can sheer off the stablizer from the aircraft. When this happens the plane can no longer fly stably. One of the final two automatically transmitted messages was a cabin vertical speed warning.

This kind of waring most likely means that the aircraft had a steep descent rate, greater than 1800 feet per minute. Thus it is likely that the vertical stablizer was sheered off and the unstable aircraft then broke up in midair in the turbulent weather. And within minutes after the aircraft broke up, the pieces and passengers went on a fast descent and crashed into the Atlantic Ocean killing everyone on board.

A midair break up is confirmed by autopsies on some of the recovered bodies. The autopsies found fractures in the legs, hips and arms with no visible signs of burning or charring on bodies or wreckage. Also consistent with a midair breakup is the fact that the bodies and debris from the doomed aircraft were spread over an 85 mile long area. The biggest pieces of the aircraft that were found were the vertical stablizer and a tail fin section. The vertical stabilizer was nearly complete indicating that there was a failure of the bolts attaching the stabilizer to the fuselage. Those bolts were made of composite material. So one of the questions the crash investigators are asking is whether or not the turbulence the aircraft ran into caused a failure in some of the composite material components used in the structure of the aircraft. In the 2001 crash of American Airlines Flight 587, an Airbus 300 with a similar design to the A330, the vertical stabilizer snapped off in severe turbulence. This was also a composite material failure.

The Train Disaster in Spain
The Malaysian Plane
Malaysia Flight